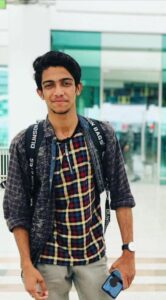 Meet Jibran korai, one of the youngest sensations of Pakistan. He started from ethical hacking in 2014 and freelancing, learned different languages from youtube, and went ahead to make Pakistan’s 1st social networking site named Public bee. it cost 2 years of his education, couldn’t attend school for 2 years. his name featured in Pakistan book record as a young entrepreneur, many tv channels interviewed him after Public bee.
Jibran inaugurated the Wall of kindness with help of NGOs.
He started working with Robart company which makes devices to control Car and other vehicles
In 2017, Jibran’s mother passed away and he closed everything.
In 2020, during COVID-19 lockdown he thought about making a Youtube channel.
he started his youtube roasting channel and named it ‘MIRCHU’ got a good response on youtube and became one of few Sindhi YouTubers, he also collaborated with Vlogger from Dadu Syed Shafqat shah and made a video on Dadu. he is looking forward to carrying on his youtube channel in Sindhi.