Faqir Qadir Bakhsh Bedel’s annual anniversary postponed due to Corona but the two-day online global conference held yesterday with participation from all over the world. 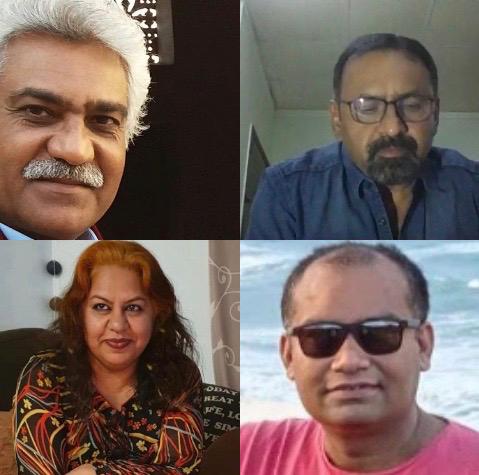 Bedel, who wrote thirty books in five languages, was a fearless public poet and preacher of co-existence and unity.
Bedil, who wrote thirty books in five languages, was a fearless public poet and preacher of co-existence and unity. Bedil’s ideology of equality, tolerance and forbearance was the ancient identity of Sindh which the world still needs today and we to maintain and to pass on to the new generation through academic curriculum.
These resolutions were presented by writers, intellectuals and poets from all over the world at the two-day Bedil Online Conference after the postponement of the annual Urs of Sufi poet Qadir Bakhsh Bedil.
Civil society activists Ramesh Raja and Manzoor Ujjan successfully organized five virtual session; visit to Dargah Bedil at Rohri, Sufi Music, a lecture, a poetry recital and a literary conference.
At the beginning of the program, Ramesh Raja said that this two-day online tribute to Qadir Bakhsh Bedil is actually for the awareness of the young generation connected to the Internet. He further said that Bedil’s ideology of equality and tolerance is an old identity of Sindh which needs to be maintained and popularized.
Sufi scholar and musicologist Akhtar Dargahi, while lecturing on Bedil’s art and thought, said that Faqir Qadir Bakhsh Bedel (1815-1873) was a prominent Sufi thinker, scholar and fearless poet of the region. Apart from regional languages, he was also fluent in Arabic and Persian. Research is still needed on the 30 books he had written and are available. He was the last poet of the classical period of Sindh after Shah Latif, Sachal, Sami and Rohal Fakir. He was a preacher of the revolutionary and Mansoori tradition of Sufism. He was not an ascetic or loneliness-lover but was a very sociable, loving man and a common man who traveled all over the Sindh.
Zafar Bhutto, a young intellectual from the United States, shared his memories of living near Dargah Bedil in Rohri, he said that there was an atmosphere of tolerance and tranquility and it was a fun moment to cook and eat together with Hindus, Christians and Muslims. But the long quarrel over the claim of heirs or ownership on tomb between cousins was a non-noble act. He further added that Corona stopped the crowd at the festival but TV programs to spread the universal message, newspaper supplements, publish souvenirs and books is not prohibited, for which the institutions and the caretakers may not be for granted so far.
Ms Neetu Wadhwani of Civil Society said that the peace, equality and tolerance with which people were living two hundred years ago in the Bedil’s era has become extinct in the age of so called and fake modern education of technology and science. All the caretakers of saints are worried about their stomach contrary to the restlessness about the spreading of message of saints. In current situation, The Hindus of this land need a place in the heart, not a temple.
Concluding the two-day conference, host Manzoor Ujjan said that according to public history, Bedil was a devoted public poet who promoted the genre of Sindhi and Seraiki Kafee. There is a great need to promote and highlight this classical literature of the past and we are doing our part and will continue to do so.
Apart from them, Rukhsana Ali from Finland, Dr. Khushal from USA, Danish Parmar from Hungary, Dr. Zeeshan from Russia, Manzoor Sethar from Bahrain, Dodo Khatian from Dubai and many writers and poets from several cities in Pakistan paid tribute to Bedel Faqir through poetry and papers.
General: Fakir Qadir Bux Bedil (1815-173) is significant name in the classical poetry of Sindh and 23 books are credited in his name on poetry, religion and history in Persian, Sindhi, Saraiki and Urdu languages. Universal brother hood, interfaith harmony, love for nature and global peace are covered in his multilingual writings and same secular demonstration could be seen on annual Urs (Fair) in Rohri (Sukkur) on 14,15 and 16 Zulqad every year.